WI Republicans are right: Return the surplus to taxpayers 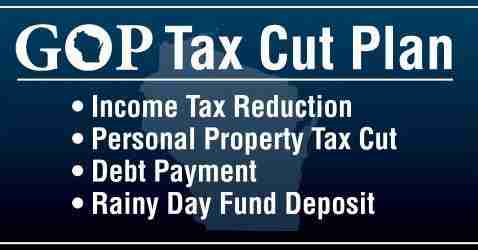 Chris Lawrence makes the case for why Wisconsin’s surplus should go back to taxpayers, and not the government.

The Editor-in-Chief of this publication, Paris Procopis, recently wrote an op-ed on what he believes the Wisconsin State Legislature should do with the $620 million surplus.

Due to a rapidly growing economy, and strong corporate tax collections our state revenues will increase by $818 million above expectations. Credit for this goes to state Republicans for the fiscal reforms made during the Walker era. President Trump and Congressional Republicans deserve credit, too, for the regulatory reform and tax reform legislation that has certainly propelled this economic renaissance.

Procopis argues that Gov. Evers and the Legislature should not do anything and deposit the entire surplus into the state’s rainy-day fund. Under current law, half of the surplus is required to be deposited into the fund. I believe this law is a mistake, however, that’s another argument for another day.

There’s certainly an argument for depositing the remaining surplus into the rainy-day fund, but not when our state ranks as one of the highest taxed states in the country. While our state tax burden has modestly improved during the Walker era, we have a long way to go. The non-partisan Tax Foundation ranks our state in the top five in the union for the highest state and local tax burden.

If the economy contracts, which there haven’t been any signs that it will, there are ways for the Legislature to address any budget shortfall. They can cut spending and rein in the excessive waste that exists in government bureaucracies like the Department of Transportation.

Legislative Republicans believe we should return part of the surplus to the hardworking taxpayers of our state. They put on Gov. Evers desk a $250 million tax cut for individuals and families, a $45 million small business tax cut, and a $100 million debt payment that would help reduce general fund borrowing. Regretfully, Gov. Evers vetoed the package, and would rather spend the money on unaccountable schools. Assembly Speaker Robin Vos said that the Assembly will probably come back into session in May to attempt to override the Governor’s veto. Any override would require two additional Assembly Democrats; as of now, it’s unlikely the Assembly would have the votes.

There are two solutions to the surplus: reduce taxes or spend it. Putting all it in the rainy-day fund ensures it will likely be spent, maybe not now but someday.