What Really Went Down at a Recent Tosa School Board Meeting 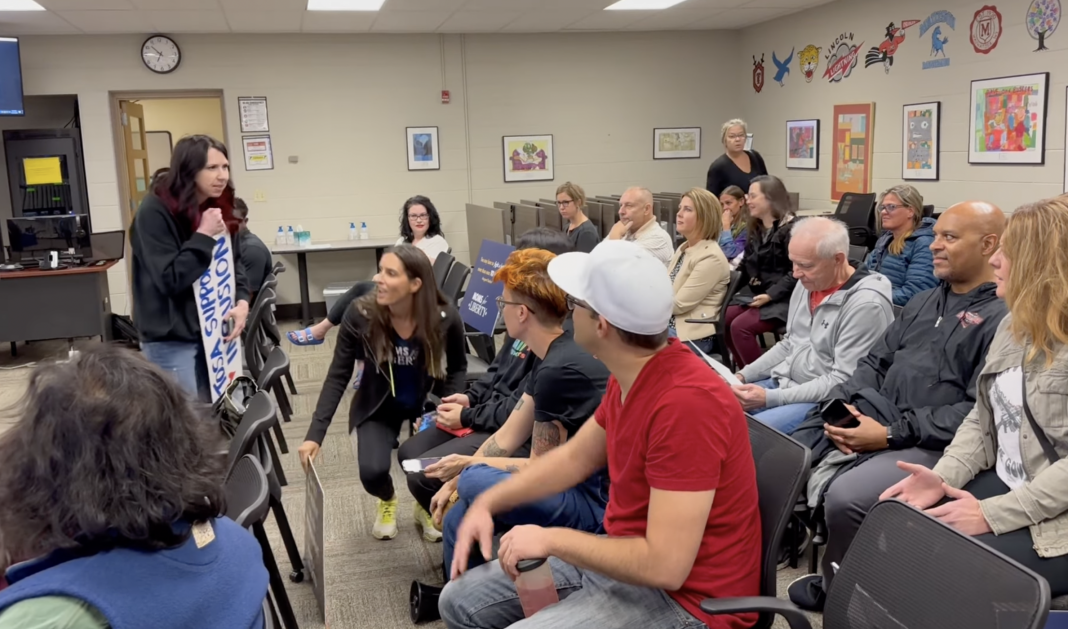 I saw a recent article in the Milwaukee Journal Sentinel and my picture was in it!? The headline read ‘Right wing activist groups targeted a recent Wauwatosa School Board meeting. They’re “Just getting started.’ I went there because of one reason, Gays Against Groomers was coming. I didn’t care if they don’t have a chapter in every town that exists, they were there to speak for me. They had my back because the School Board doesn’t.

When I got there, I went over to where Jamiee Michell was. Jamiee is the founder of Gays Against Groomers. Gays Against Groomers, and their counterpart Trans Against Groomers are gay and trans people who agree with people like me, that the Human Growth and Development (nice name, about 95 parents in Wauwatosa said they were ok with this in the school’s survey of over 13,000) agenda goes way too far.  I was genuinely comforted that people in the gay community were standing up for my kids.

Since we had someone who was actually represented by the LGBT flag, I really thought it would be peaceful. Boy was I wrong.

At the time, Jaimee was being interviewed by WISN 12 News. I stayed in the back to respectfully listen. Then, I noticed a man, a little bigger than myself (and I’m 6 ft). He was aggressively pushing his way through a group of women from the education activist group, Moms for Liberty, in an effort to get his sign in front of their faces. At the same time, he was threatening to call the cops if he was touched. He was basically being a big jerk and acting like a temperamental child.

It enraged me to see this man, bigger than me, bully a bunch of women who were standing there being polite. He was the only one representing the opposing side in that area at the time. There were only a few who showed up.

What makes things worse, is that guy had his young son with him. I’ll get back to him, it gets a little weird.

I asked him why, as a man, he was doing this to women. He responded with things like, “I’m just standing here with a sign” or other vague statements. So I took a sign and held my sign in front of him. As proven in the video posted by Scarlett Johnson I  obviously kept my cool. I had no desire to escalate a situation, but what he was doing was plain wrong; no man should ever physically intimidate a woman. Ever!

After that died down, he tried to engage me, but then pulled the safe “I’m just here minding my business” statements. He then said something to the effect “Why don’t you want your daughters to learn things?” Well, the things she will learn make me blush to repeat, and are most likely illegal to publish. I said absolutely not. I asked if his son was in 6th or 7th grade with the intent of making a point.

Here is where it gets weird.

He said, “Yes, he has erections, he’s had his wet dream”. In a very stern voice. In front of his kid. I felt so bad for the kid. Can you imagine? Then I ask why he was telling me about it and he insists I wanted to know! My heart sank. I was so flabbergasted and I told the kid to make up his own mind. His dad was using his kid as a shield. Can you imagine how much pain he was in? What kind of man puts his child in a position like this? Politics aside. My kids would never be allowed to attend an adult protest.

We made our way inside.

Since I was there to Support Gays Against Groomers, I sat by them. I was creating polite conversation and some lady came in yelling at someone saying “How dare you make a little boy cry!” as you can see in the Video.

Since she was yelling at the wrong person, I directed her attention toward me. As you can hear and see me de-escalate the situation. I had to leave early and walked with the lady who yelled at us out into the hallway. There was an officer that saw it, not sure if he heard it. I told her how bad I felt that this little boy had to sit there and hear his dad say that. We talked for a minute, we shook hands, and we knew we disagreed but we were both people who just care.

The funny thing, the Journal Sentinel used a picture of me right around the time the incident happened. Did they have a story and just needed a picture? Or did they watch the videos, like you’d hope a journalist would do?

I’m a Wauwatosa Parent, and in the story, I was not represented. But, I was good enough for them to use my picture. I spoke to the board that night. I spoke to WISN. I was a calming force. Why wouldn’t I count as a Wauwatosa Parent? I’d find it hard to believe the author who wrote this actually knows what happened. If they do…..that’s evil; defaming a LGBT group because they don’t do as they’re told or follow the acceptible narrative.

That’s the thing, most are good people who want everyone to do well. As a people pleaser, I still have a little cognitive dissonance when someone doesn’t like me because of an opinion. We often listen to the Fox/MSNBC logic that the other side is dangerous, but I’ve never believed that.

So anyway, I walked away feeling really good thinking I’d built a bridge. Isn’t that what we are supposed to do as a society, find ways to connect?

The article in the Journal Sentinel made me so mad. It sounded like the sweet innocent parents of Wauwatosa want these evil outsiders out. Now admittedly Scarlett was poking the bear in a sense, but I don’t blame her. You should see what they do to her. She’s tame and just says what they’re going to be teaching kids. She’s always acted cordially. How the people who are for this garbage can be so hostile and intolerant is disheartening.

I say this because I want to acknowledge there was a lot of tension in the room. Also, Scarlett is easier to pick on because she’s pretty small in stature. I’ve seen a few men at these rallies try and intimidate her.

I was there to stand up for my daughters. I’ve been used twice now in Journal Sentinel stories. Why is my picture good enough to use in their stories, but they don’t make any effort to tell my story as a Wauwatosa Parent? Why do they go out of their way to defame Gays Against Groomers? I use those words because no reporter in the world could get this so wrong unless it was intentional. It was that obvious to see.

It’s scary. I’ve never gone out of my way to hurt someone who disagreed with me. I now must be ready for my personal and professional life to be scoured for something, taken totally out of context, that can cancel me.

This is long-winded, I just wanted to make sure I didn’t leave out details or context. I write because, not only do I want to change what’s being taught, I want to build bridges in our community that we have been burning down just because people disagree with extreme ideas.