From Political Unknown to the Verge of Victory, Tim Michels does the UNEXPECTED 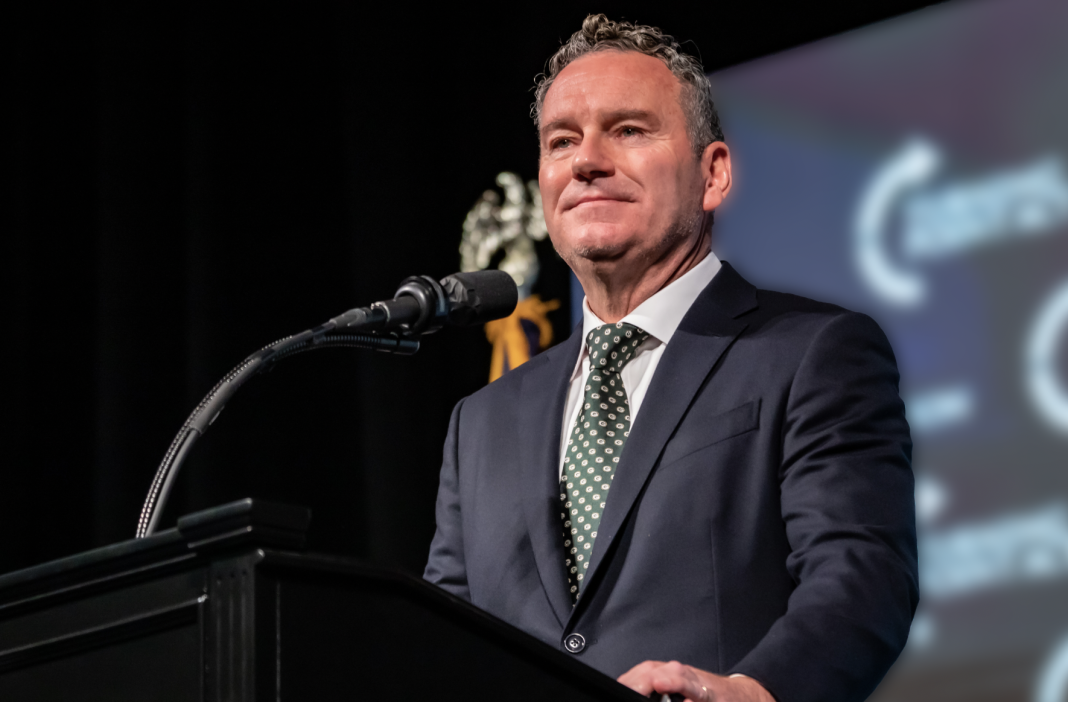 Here we are, just days from perhaps the biggest Governor election in Wisconsin history. This was coming down to an epic battle between the disastrous professional politician, Tony Evers, and the surging businessman Tim Michels.

That’s right, I said ‘was.’ What we saw during the one and only debate between both Governor candidates was a clear contrast and Tim Michels wiping the floor with the mediocre Tony Evers; the Mr. Rogers wanna-be.

On one hand, we saw a spiraling incumbent desperately trying to cling to power and struggling to find a single success to celebrate in his disastrous first term. In fact, the only success he had was signing Republican tax cuts he was forced to sign. Certainly, he couldn’t bring that up.

He had NOTHING to offer and was a stuttering, babbling mess with zero substance. He seemed to be channeling his inner Joe Biden. After all, Evers has been in hiding for months and hardly campaigning. He must not care about Wisconsin to even work for the job he wants so desperately to keep.

The strangest part was listening to Tony Evers discuss his sleeping habits. While he was doing that, I suddenly had the image of Ebenezer Scrooge preparing to sleep before the ghosts came to visit him.

On the other hand, Tim Michels showed himself to be a competent, precise, and articulate leader who, dare I say, looked and acted like a Governor. Tim was a little sluggish at the start but seemed to hit a stride and never really looked back.

He did struggle a little with one Left-wing planted environmental question, but on the issues that actually mattered, he pulled straight A’s. He knocked the questions about Guns, Crime, Abortion, the Economy, Inflation, etc, all out of the park.

Even his answer on Kenosha violence was beyond perfect, Evers responded by saying he ‘did what he was asked to do.’ What? Last time I checked, he is the Governor, which gave him the power to act unilaterally if needed. He CHOSE NOT TO ACT until Kenosha burned.

Personally, my favorite part was when Tim referred to the ‘Barnes/Evers’ administration. BRILLIANT! Tying Evers to Barnes, and highlighting the fact that the Barnes baggage occurred under Evers’ watch, is such a stronger argument, and it will work. This also helps Ron Johnson.

Going into the debate, the latest polls had the race in a statistical tie. Tony Evers is stagnant at 47%, not a great position to be in at this juncture. Evers was at 48% in August, 47% in September, and 47% in October – no movement whatsoever.  Michels on the other hand was at 43% in August, 44% in September at 46% in October despite being outspent 3:1 for most of the general election.  Frankly, that speaks volumes about how voters feel about Evers.

Going forward, look for Evers to still be stuck at 47% and Michels to gain some momentum. Especially since the latest Marquette Poll had the 3rd party Conservative, Beglinger, at 4%. Beglinger suspended her campaign and endorsed Michels weeks ago. I doubt she will even be at 1%, putting Michels with a likely commanding lead. Remember, Marquette Law School had the GOP primary tied and Michels unexpectedly outperformed that poll and won by 5%.

Now, just over two months past a hard-fought primary, it’s a different race altogether, and I must say, I am very impressed with Tim Michels and the ‘unexpected’ race he is running. When I use the word unexpected, this is not a negative, far from it.

Tim Michels is daring to do things differently. We need to remember, he’s not a professional politician or part of the Partisan Madison establishment, and that’s very refreshing. Extraordinary indeed.

For starters, he’s invested nearly $20 million of his own money, and he’s not finished yet. Name one politician in Wisconsin history who has invested so much. And let’s face it, being governor means a significant pay cut for him, so it’s obvious he’s not doing it for his own financial benefit. He does not NEED the job.

This means he’s investing in Wisconsin, investing in us. Sound familiar? There’s a reason President Trump endorsed him.

Since the beginning, his campaign has been laser-focused on the Prize. That’s in stark contrast to those who were busy working on the transition (measuring the drapes); Michels was focused on defeating Tony Evers.

A couple of months back I wrote about the fact that Tim Michels had money, which put him in the unique position to keep up with the inevitable Democrat financial onslaught. Finances, which were being stockpiled because Evers had no primary.

I also said that, while important, money meant nothing if the candidate had no substance. Otherwise, we would have President Bloomberg now and Alex Lasery would be taking on Ron Johnson, instead of Mandella Barnes.

Tim Michels has shown that there is pure substance behind those dollars. Sure, he could have just hired a bunch of people, sat on his laurels, and let his staff do all the work. But clearly, that’s just not his style.

From the start, he has rolled up his sleeves and has been in the trenches busting his butt out there. He is literally going EVERYWHERE, and I’m not embellishing one bit. On top of that, he is just incredible at connecting with voters; whether he’s speaking from a stage or talking face to face. He’s come a long way from ‘reading’ his speech at the convention.

His debate performance last week showed that he is willing to learn and grow. He listened. This, not only shows leadership but also shows humility. This is rare in politics.

I have not seen anyone work this hard and be able to connect with voters in Wisconsin since Tommy Thompson. And that’s saying a lot since, even to this day, Tommy is loved and respected around the state.

Tim Michels is leading by example. Through his leadership, he has put together a phenomenal grassroots campaign organization that ‘almost’ works as hard as Tim does; almost.

What’s different about Tim Michels and the campaign is that they are thinking outside the box and DOING THINGS DIFFERENTLY. The same mindset that earned him his primary victory.

Tim is constantly traveling from the farms in Western Wisconsin to paper Mills in the Fox Valley, to the inner city of Milwaukee. These areas have been largely ignored and taken for granted by Tony Evers and the Democrats, and to some extent, the Republicans. I cannot imagine a single mile of road in Wisconsin that Tim Michels has not crossed.

Tim’s pragmatism, leadership, and business sense will allow Wisconsin to almost immediately re-open for Business. This gives me hope. Ending the Evers trainwreck and protecting us from the Biden trainwreck.

Tim Michels is standing with us, so we must stand with Tim Michels.

I am pleased to see that many have stepped up to support Michels. Governor Scott Walker has joined Governor Tommy Thompson to fully and publically support Tim Michels. Scott Walker supported his opponent in the primary, but clearly, Scott Walker gets it and is supporting Tim Michels. Why? Because that’s what adults do.

Tim Michels is the ONLY choice for Governor and literally the only chance we have to affect the changes we so desperately need.

As I said before, Joan Beglinger has suspended her campaign and had FULLY ENDORSED TIM MICHELS. And, on another note, THERE IS NO TIM RAMTHUN WRITE-IN. At a recent campaign event in Green Bay with Governor Desantis, Ramthun was there and got a shout-out from Tim Michels. Ramthun told me straight out that ‘beating Evers is the most important thing.’ He gets it as well.

As you can see, people are stepping up and doing the right thing, for the right reasons.

They are also putting money where their mouths are, Contributions to the Michels campaign are going extremely well. That’s right, I said ‘contributions.’

From the beginning, Tim Michels has said he would be self-funding and not taking contributions from lobbyists. And, on that, he has kept his word.

Even though Tim has invested in us by investing Millions of dollars, the Democrats are still out-spending him. TIM CANNOT AND SHOULD NOT SHOULDER THIS BURDEN BY HIMSELF. Thousands of voters across the state have stepped up to donate to the Michels campaign because they get it. And more are donating every day.

But it’s not just the money money, we also need to invest our time. We need to talk to people, send letters to the editor, knock on doors, make phone calls, EVERYTHING. We must play to win!

For those focusing on Ron Johnson’s campaign and Eric Toney’s campaign, remember the history of recent races in Wisconsin. As Craig Gilbert pointed out in the Journal Sentinel recently, the last time we had one party win a US Senate seat and the other party win the gubernatorial election was in 1998 when Feingold and Tommy both won.

WE MUST SWEEP ON NOVEMBER 8TH!

Since we are in the middle of football season, it’s appropriate to quote the late, great Coach Vincent Lombardi:

‘I don’t say these things because I believe in the ‘brute’ nature of men or that men must be brutalized to be combative. I believe in God, and I believe in human decency. But I firmly believe that any man’s finest hour — his greatest fulfillment to all he holds dear — is that moment when he has worked his heart out in a good cause and lies exhausted on the field of battle – victorious.’

Tim Michels has proven he’s standing with us, now we need to show we are standing with Tim Michels. We are on the cusp of taking our state back from the extremists who want to ‘fundamentally change’ things. This is our chance to work our ‘heart out in a good cause’ and lay exhausted on the field of battle – VICTORIOUS!