Three candidates, Trump, and a podium 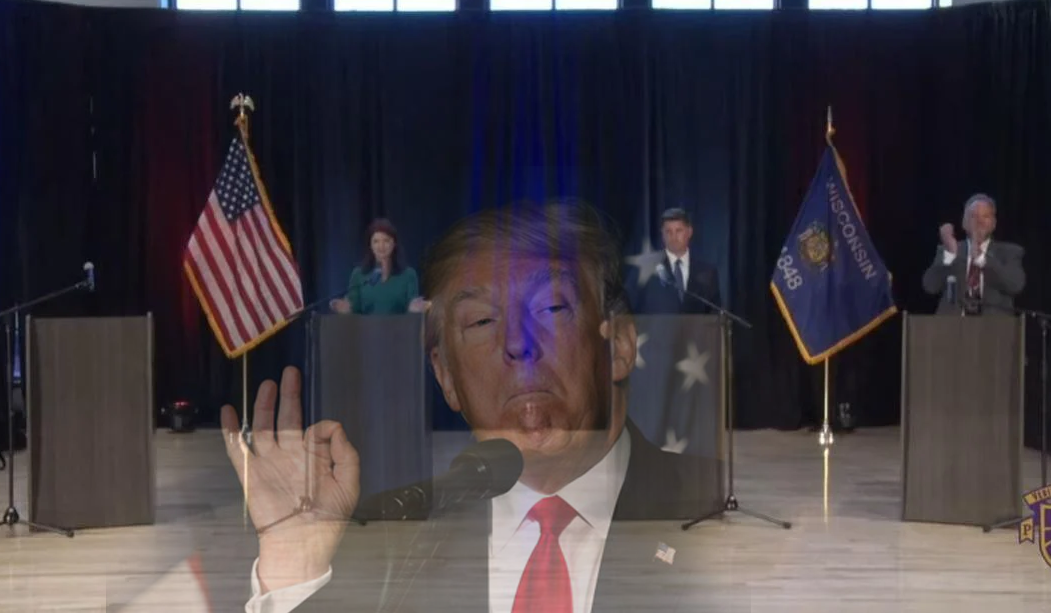 The first Republican governor candidate debate proved to be interesting. The overall theme was anti-Evers and anti-Michels. Tim Michels was the only one absent from the debate, more on that later. That being said, there were winners and losers.

Representative Tim Ramthun did a great job of showing that there was more to him than the Robin Vos-created caricature of being a ‘one-trick pony.’ Ramthun is well known for being passionate about looking into the 2020 elections and was literally the only candidate who would commit to saying whether the election was stolen or not.

Aside from that, he was able to show that he had command of other issues facing Wisconsinites and Americans. He definitely helped his campaign, though will not likely move the needle because his struggle to get traction. He basically did nothing to hurt himself.

The ultimate winner was Kevin Nicholson. He proved to be in command of the issues, was humorous at times, and showed incredible gravitas. His answers were succinct and he came across as sincere.  It did not feel like he was robotic or scripted in the least.

In his case, I think he definitely helped move the needle, but I am not sure by how much. I think many struggle because he used to be a Democrat. I think that is short-sighted because after all, isn’t that what we are hoping to do, have more people see the better direction? Time will tell how this helped him, but, appeared very “governoresque.”

As for the ‘stolen election’ question, he answered by saying there were illegal activities and left it at that. Probably a shrewd move. The only criticism I would have for Kevin is that he should have stayed away from the subtle Michels jabs in his closing words. They were out of place and unnecessary.

Rebecca Kleefisch was the ‘THE BEST! Why? Because she said so…several times. In reality, she was the ultimate loser of the night. I am clear that  she has a lot of support and she is a front runner. This debate exposed her ultimate vulnerability, Tim Michels, and to some extent, herself. She came across as overly scripted and insincere. Kleefisch spent the most time attacking Michels.

So if Michels won $1.6 billion in contracts, the taxpayers must have saved tens of millions over the higher bids. Something to ponder.

I found this rather disingenuous because she had no problem taking Michels’ money when running in the four elections she constantly brags  about. In fact, she seemed to not have issues with his money when she placed him on her 1848 Project advisory board, and he’s still on there. More Kleefisch hypocrisy, but, that’s another story.

Yes, I am certain that she absolutely believes what she is saying, but she was so afraid of slipping up and losing her ‘rock star’ status that she may have overly prepared. She was doing what we call in public speaking circles the act of ‘reading in her head.’

I know that her campaign has been playing cat and mouse debate games throughout the year by making sure the opposition was absent before showing up. This was going on long before Michels entered the race. Almost like she was ‘too good’ to share the stage with anyone else.

Her team would have a convenient schedule ‘conflict’ if Michels was coming. Knowing her only perceived threat would be absent, and since Ramthun and Nicholson are no longer perceived threats, she finally showed up.

Unfortunately, speech semantics aside, her obsessive disdain for the absent Michels and jabs throughout the night grew tiresome and show she knows she is behind. This incessant focus on Michels overshadowed any policy ideas she talked about. She reminded voters multiple times she has won 4 of 5 statewide elections. But she failed to mention the one she lost was against Tony Evers.

That being said, her biggest failure of the night was her overt REFUSAL to answer the ‘stolen election’ question at all. She punted and this showed a strong lack of leadership on her part. It begs the question, what else will she punt on if elected?

Now for the albatross in the room, the obvious absence of Tim Michels. Joe Giganti, was clearly annoyed that Michels was absent due to a ‘scheduling conflict.’ He even had an empty podium set up and referred to it throughout the night. Cleaver to be sure, but, I do not think it had the effect that Giganti and the candidates had hoped for.

At first, my knee-jerk reaction was to wonder what in the Hell the Michels campaign was doing by him not being there? He should have been there, right?

Well, not so fast. Remember the 2016 election where Trump would do things to become the center of attention, even when not there? Early in 2016, Trump skipped the first Iowa debate and most pundits predicted this was a fatal move for Trump. Turns out, it was not.

Tim Michels may have pulled off his first ‘Trumpy’ move of the campaign. Even though he was not present, he may have gotten more ‘air-time’ than he would have, had he been there. Especially since Kleefisch and Giganti were incessantly evoking his name. Unpaid advertising for Tim Michels. This may turn out to be a brilliant move.

Surely this cannot and should not happen again. Michels needs to be on the front lines to answer the difficult questions. It’s important for the people to see what he’s made of when being attacked by Republicans, so they know how well he will stand up to the forthcoming onslaught of Democrat attacks.

Well, one thing we know for sure, we have a deep bench of candidates and have the chance to fire Tony Evers if we do things right.  For now, the fight continues.