The Wisconsin RED WAVE: We Sweep, or We Fail, It’s in Your Hands 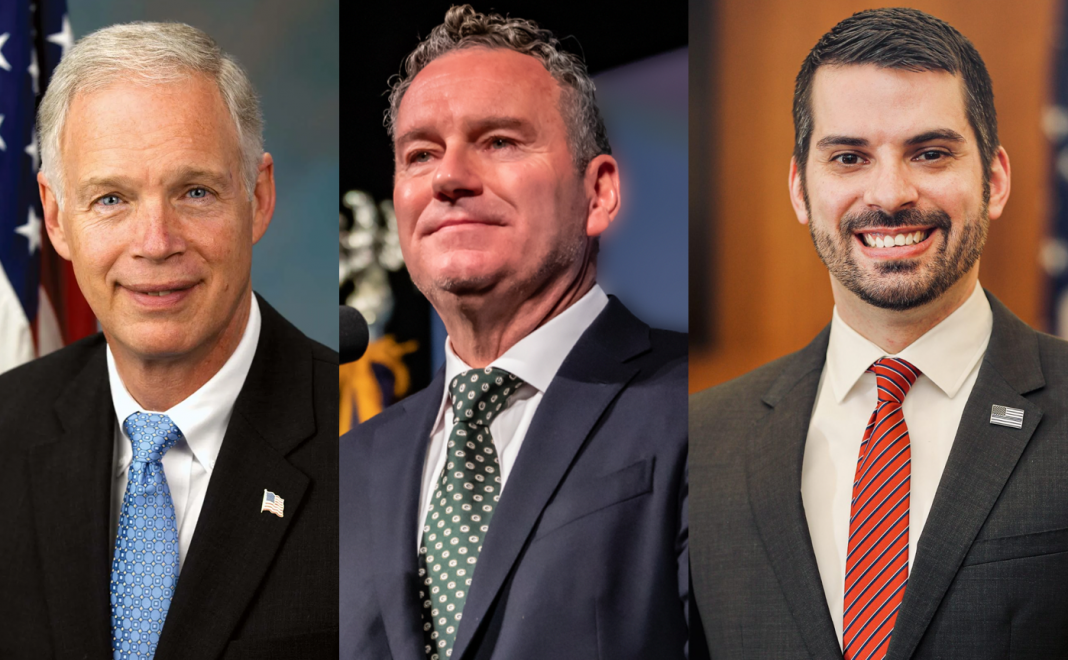 In the past, a Republican could lose to a Democrat and it was safe to say that we had time to regroup and get them ‘next time.’ Only now, the Democrats have sold their souls to the EXTREME LEFT-WING of their party.

This is no longer the party of JFK. Heck, it’s not even the party of Bill Clinton. When the Democrats win, IT’S EXISTENTIAL, and each election cycle brings us closer to the proverbial cliff.

Mandela Barnes, Tony Evers, Josh Kaul, Nancy Pelosi, Chuck Schumer, Kamala Harris, and Joe Biden are ALL agents of CHAOS. They are nothing but different heads of the same Left-wing extremist Hydra. We must remove the whole monster because just like the mythological creature, you remove one head, and two grow back.

We certainly have our work cut out for us. Nationally WE MUST follow through with that ‘Red Wave’ that looks to be forming across the country.

Republicans must reclaim the House of Representatives from the claws of Nancy Pelosi and the ‘Squad.’ The Democrat House majority isn’t just liberal.  They are dangerous.  The notion of ‘blue dog’ moderate Democrats is long gone. These people are the ‘crazy, unhinged, left!’

Even more importantly, we need to reclaim the Senate from the clutches of that Whiney, spoiled, Child, Chuck Schumer, and his nearly incoherent and incessantly cackling partner in crime, Kamala Harris.

The GOP needs to retain Wisconsin and Pennsylvania and then win either Nevada, Arizona, or Georgia to take the majority.  As of today, all three Democrat seats lean toward the Republican candidates.  Oh, and our ‘long-shot’ candidates in New Hampshire and the state of Washington are tied with their Democrat incumbent opponents.  The GOP could end up with 53 US Senate seats next week.

Seriously though, at least Joe Biden has the excuse of impending dementia for his incoherence; what is Kamala’s excuse? But, I digress.

The Senate is also responsible for Judicial confirmations, we have the chance to protect the Judicial firewall that Trump gave us. On top of that, we cannot allow Police De-funder Mandella Barnes, to become the first “Squad’ member in the United States Senate. Yes, Mandela Barnes makes AOC look competent. He has literally accomplished NOTHING in his life.

Winning also allows Republicans to have serious hearings about Hunter Biden’s corruption; Fauci’s true role in the Wuhan lab and get to the bottom of what is going on at the board after they impeach Mayorkis.  Oh, and they may finally get some straight answers from Chris Wray and the FBI on their overt political bias.

That being said, the Senate and House races are only part of the equation. Even if we retake both houses, Joe Biden can still do plenty of damage through Executive order. And God forbid, if he quits and extremist Kamala takes the reins, we will need a state level barrier to protect us from their Federal overreach.

The ultra-woke extremist Attorney General, Josh Kaul has been dangerous to our rights since the beginning. Everything from ignoring rights during COVID to calling parents “Domestic Terrorists,’ who were attending School Board meetings and voicing disgust with extremely racist and hyper-sexualized school curricula around the state. He has also done NOTHING regarding Voter Integrity and ILLEGAL activities of WEC and others during the 2020 election.

Eric Toney has a solid track record of prosecuting crime and applying the rule of law. He understands that, as Attorney General, you must enforce ALL laws, not just the ones you agree with. More importantly, Eric Toney has successfully prosecuted voter integrity claims. This is Huge.

It’s been nearly four years since we had a competent Attorney General, and it shows. KEEP SWEEPING!

Nobody has been worse for Wisconsin than Governor Tony Evers. Evers literally and deliberately DESTROYED THE WISCONSIN ECONOMY. Already a complete train wreck, in 2020 he immediately used constitutional Emergency Powers to shut down nearly the entire state in order to scuttle our economy.

He alone determined who was ‘essential’ and was allowed to engage in commerce. He also shut down schools and enforced a draconian ‘mask’ mandate for all of us, but especially our kids.

He wouldn’t even allow people to engage in Constitutionally protected freedom of Religion by shutting down churches. At a time when people needed it the most. All this under the guise of ‘good intentions.’ Why? To get ‘Evil Bad Orange Man.’ We suffered because of political posturing.

Let’s not forget that it was not until the State Supreme Court stepped in and reminded Evers that he was not a dictator, did the draconian measures begin to wain. Evers should have known better, but he and his ‘WOKE’ extremist political puppet masters don’t care what you think.

Just look at the damage they were able to do even with the Republican legislative firewall.

In fact, Evers cares so little for the people of Wisconsin, that he has only literally been campaigning for two or so weeks. That’s right, Wisconsin is NOT WORTH HIS TIME OR EFFORT. Maybe that’s why 63% of voters on the most recent Marquette Law School poll say the state is seriously off on the WRONG TRACK.  That’s a 10% increase since September and one of the highest ever recorded by Marquette.

As I have said before, it’s time for us to elect a hero in order to retire the zero. It’s time for Tim Michels to be swept into the Governor’s office so that together, we can work to undo the damage that EVERS has saddled us with.

Tim Michels is the ideal candidate, at precisely the right moment, to get Wisconsin back on the path to prosperity. Coupled with his impressive Military experience, Tim’s long track record of business success is EXACTLY WHAT WISCONSIN NEEDS to save us from the incompetent Evers trainwreck.

Just imagine what Wisconsin can do with Tim’s experience at the helm. Gone will be the days of Madison overreach.

Tim will handle real issues, like giving power back to parents regarding their children through the ‘Parent Bill of Rights’ and Universal School Choice. He will work with cities to give them the resources to tackle the out-of-control crime problem. Tim will use his business experience to streamline government in order to help cut costs at home to help with inflation.

There is a clear contrast between Michels and Evers, and Michels is beginning to shine as a candidate. On top of this, having a competent Governor will help protect Wisconsin citizens from Joe Biden’s extreme Federal overreach. This is imperative.

Unfortunately, there are those who feel they need to ‘prove a point’ out of ‘principle.’

I have said before, what good are ‘principles’ if you do not have the power to do anything about it? We have seen this before and it fails each time. Yes, I have ‘taken stands’ before and what good did it do? In 1992 I voted for Ross Perot, because of ‘principles’ and we were stuck with Bill Clinton. Luckily I grew up and learned from my mistakes.

We have people who are refusing to support Ron Johnson because he said he would not run again. Well, too bad! It is more important to keep this seat and not risk the Democrats gaining existential power. It was imperative that he ran.

There are others who are still upset about the August primary battles for Governor and Attorney General. Well, that was August, and it is now it’s November. That’s what primaries are for, sometimes we lose and sometimes we win, then we MUST support the winner, lest you give the other side power because of a childish temper tantrum.

That mentality almost gave us Hillary Clinton in 2016 and likely gave us Joe Biden. As I have said before, you can surely feel like you are being ‘principled’, but what good are ‘principles’ when you are standing in a soup line? And that’s where we are headed with the likes of the Barnes/Evers team.

There is no write-in candidate or 3rd party candidate for Governor. And leaving any line on your ballot blank is killing any chance of getting any of the changes you wish to affect. We get NOTHING with Barnes, Evers, and Kaul…NOTHING!

Simply complaining about what you ‘wish’ would happen is not affecting change. We cannot affect change if we are not in a position to do so. Like Vince Lombardi is famous for saying, ‘Winning isn’t everything, IT’S THE ONLY THING.’

There are also some who are very concerned about WEC and the likely ‘irregular’ election activities like we saw in 2020 and are thinking of not voting out of fear their vote will not count. Let me make this plain. WEC is here and there is literally nothing that will change between now and election day. This is the hand.

Perhaps you should try consuming plenty of fiber before voting so you do not experience any voter irregularity.

In all seriousness though, if you stay home, they have already won. If you stay home we will NEVER be able to be in the position to do something about the election fraud you fear. NOTHING SHOULD KEEP YOU FROM VOTING! We need to show up in such immense numbers that their attempts to ‘stack the deck’ fail miserably.

Our forefathers and tens of thousands of soldiers over the years did not bleed and die for this country just to have it willingly handed over to extremists who hate this country and everything we stand for.

NOTHING JUSTIFIES ANOTHER FOUR YEARS FOR JOSH KAUL, TONY EVERS, or ALLOWING MANDELA BARNES ANYWHERE NEAR THE SENATE, NOTHING.

This is our hand, and in reality, this is our ROYAL FLUSH! We MUST ALL vote for Ron Johnson, Tim Michels, and Eric Toney. Anything else is just helping the other side. Period! It is literally ALL OR NOTHING.

And we do not get any rest after November, because that wave must continue through April and beyond. So, dig in, we are here to stay.

Let’s get all get on our boards and SURF THAT RED WAVE, so we can have a sweep to save Wisconsin and our country. THIS IS OUR MOMENT.