The Transgender Issue is NOT the Selma of Our Time 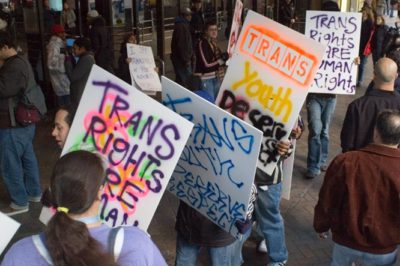 Being a Conservative with some Libertarian leanings, I tend to have a ‘live and let live’ attitude. I have no issue with people living their lives as they wish, as long as they do not harm others, or force the mainstream to preferential treatment in order to accommodate their lifestyle.

Ever since Caitlyn Jenner ‘manned’ the airwaves about his transition many months ago, the transgender issue has been flooding the ‘blogosphere’ and I find myself writing about it yet again.

A while back I posted a story on Facebook about Obamacare covering gender transition treatment and gender reassignment surgery. I made it clear that if someone wants to transition to another gender, they are free to do so, I just don’t want to pay for it.

Naturally, this captured the attention of a Facebook follower who happened to be transgendered.

He argued that this is not elective and should be covered. I refrained from commenting further because I wanted to see how the thread unfolded. For the most part it was peaceful discourse.

Suddenly, the next morning I received a message from this person saying that with my insistence on ‘supporting the discrimination against transgender citizens’ he no longer found me worth following.

I basically said that I have never supported discrimination against anyone, but I wished him well in the future. What should have been the end of it lead to a scathing rant against me and my character. Mind you, I have never met him in person.

In perfect Liberal fashion, it started to get interesting once the hyperbole and character assassination started to flow.

He immediately went on the attack and accused me of being fine with transgendered men being forced to use a men’s locker room where they would likely be assaulted and possibly killed.

He then compared me to a lynch mob and compared his plight to that suffered by blacks during the civil rights movement. Huh?

This showed how truly selfish that many in the transgendered community have become. They are not just living their lives as they wish, they are forcing their point of view on others and expecting society accommodate their wishes.

Add to that, the arrogance displayed by comparing themselves to the suffering of blacks is completely insulting. No, I am not black, but I know the history of slavery, the lynch mobs, and discrimination based on something they could not hide, change or control.

I know these transgendered extremists do not speak for the entire group, but they are certainly making their side look bad. If they are feeling harmed, perhaps they should look in the mirror and change their pushy, ‘in your face’ attitude.

The Constitution guarantees rights as stated, and the transgendered community still has those rights. You cannot create rights for a specific group while infringing on the rights of others.