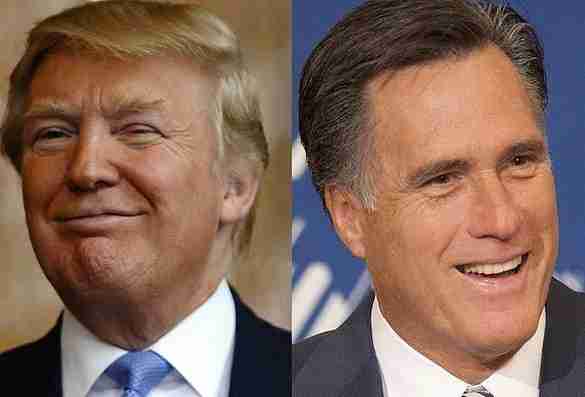 Donald Trump is the presumptive Republican Presidential nominee, so the common reaction is for all party members to rally behind their candidate, but not this year.

Sour grapes anyone? It looks to me like Romney was hoping to be the nominee at a contested convention, but Donald Trump will win the nomination having gone through the same process that Romney went through in 2012 when he won the nomination. This is nothing more than Romney trying to render the process irrelevant.

Of course, Romney is having issues with Trump’s perceived lack of<em> ‘conservative credentials.</em>’ Hello pot, meet kettle. Romney has evolved over time, so why is it impossible to think that Trump can’t change?

I recall a time when Romney was pro-choice and let’s not forget that he was also Obama’s muse for Obamacare. So, Mitt, you surely shouldn’t cast the first stone.

Romney is reaching out to folks like Nebraska’s Ben Sass and former Presidential contender John Kasich for the job. Time will tell if they take the bait or if Romney will run himself.

Many prominent Republicans are encouraging Romney to stand down, even RNC Chair Reince Priebus has called the tactic ‘political suicide’ and he’s absolutely right.

A couple of months ago Romney said that if Republicans chose Donald Trump as the nominee that the prospects for a prosperous future would be greatly diminished. What exactly does he think will happen under Hillary Clinton?

This will do nothing but splinter the party further and all but guarantee a victory for Hillary Clinton.  Of course, this doesn’t matter to Romney since this is by design. He wants Clinton to win.

A Clinton victory would continue the downward spiral that Obama has set in motion. Imagine the United States after just four years of Clinton and all of the damage she could do.

What’s more, this will create the environment where Hillary Clinton will get to nominate at least three Supreme Court Justices. That coupled with the looming that the Democrats will regain the Senate, this is dangerous ground indeed.

Losing control of the Supreme Court for a generation is the single biggest reason we cannot allow ourselves to splinter.  Trump has already been on record saying he would choose Conservative Justices like Scalia.

Mitt Romney and those people that support this tactic had better ask if they really think the ends justify the means. I do not, that is why I am <em>#neverhillary.</em>