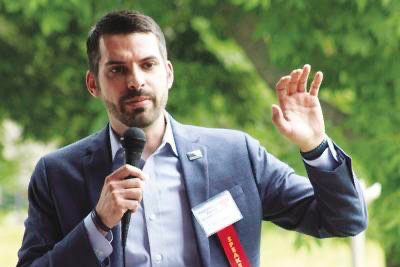 A lot has been said on this page and behind closed doors about the dearth of silence regarding the decision by Rebecca Kleefisch and a number of her loudest backers to stay relatively silent in the home stretch of the razor’s edge gubernatorial election. Barack Obama can manage to slink away from the comfort of refugee deporting Martha’s Vineyard to campaign for Tony Evers, but the Kleefisch clan can’t hop on 94 to make it to a public event for the nominee of our party. Michels may just pull off the win anyways, but a few spots down the ballot there is another race where former rivals are silent as the grave in helping the Republican nominee for Attorney General.

Eric Toney pulled off no small miracle on August 9th. Despite being outspent more than 10 to 1 he was able to defeat Adam Jarchow and Karen Mueller. Shoe leather and law enforcement endorsements trumped Madison Inc.’s wishes in the primary, but with just over 20 days to go what is conspicuous is what is not happening. The same forces that combined to spend over $1 million on Adam Jarchow’s behalf have kept their wallets closed in the general election to date. The normal big-money Republican donors, with maybe two exceptions, have not sent in the normal checks. And with Josh Kaul walking into the general with nearly $2 million in the bank it begs the question of whether the GOP is phoning in the race for Attorney General.

Perhaps the most telling example of the lack of coalescing behind Toney has been the lack of Ryan Owens or Adam Jarchow appearing at a joint event. Both gentlemen proved adept at securing the support of the donor and political class, and all in all, ran quality campaigns that were they to vocally extend their support would motivate support for Eric. To date, they have declined to do so with early voting soon to begin. A unity rally is usually best done in September to heal the wounds from a tough primary, but the middle of October is better than never at all. Eric’s finances could stand for the boost after posting a $136,000 fundraising month, his best to date, but still dwarfed by Josh Kaul.

Like Michels, it may be the case that Toney will not need the gesture of unity. He has law enforcement behind him, the Republican Attorney General’s Association is spending $700,000 on his behalf, and Josh Kaul’s record is a target-rich environment. However, it cannot be denied that as far as further financial help that it will not be coming from RPW which still has to focus on every race while being 4-1 by DPW. Josh Kaul and the Democrat Attorney General’s Association are already outspending Toney and RAGA by a similar 4-1 margin. So it begs the question of what will it take to get former rivals and donors off of the sidelines and into the game with just over 20 days left?