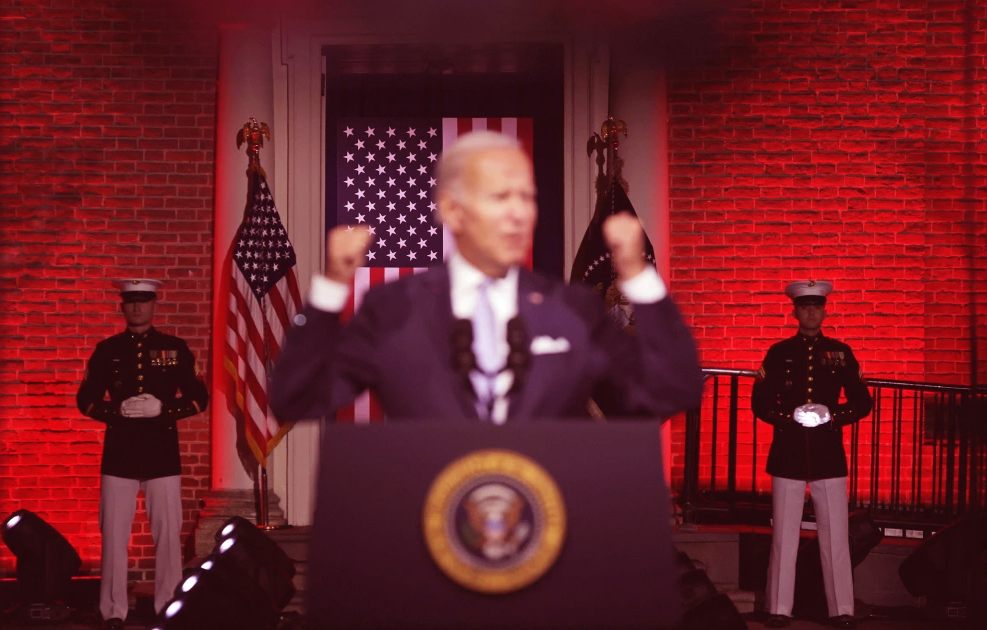 “With malice toward none, with charity for all with firmness in the righteous, God gives us to see the right let us strive on….to bind up the nation’s wounds….” Abraham Lincoln

Contrast Lincoln’s unifying words with Biden’s words of division, even hate, with a blood red backdrop in his recent nationwide speech.  There is no greater contrast between someone who speaks unity and someone who speaks hate and division.  Biden said we Republicans are neo-fascists threatening the very existence of the Constitution.

Who wants to get rid of the filibuster and pack the Supreme Court?  The Dems. Who proposed the Ministry of Disinformation (Ministry of Truth in Orwell’s 1984) that the Dems would control?  Who has acted as an Orwellian Big Brother telling us what we can say through Cancel Culture and FBI and Justice Dept. intimidation?  Who has threatened parents who spoke up at school board meetings with prosecution?  Who prosecuted a totally innocent Kyle Rittenhouse as a vigilante murderer?  Who subjected us to unreasonably long unscientific lockdowns that led to lower reading comprehension in children and higher suicide rates in all age groups and don’t even work according to a John Hopkins study?

All Democrats.  Yet Biden says Republicans are neo-fascists.  Isn’t that special!
Biden read teleprompter directions a few weeks ago, “End of quote.  Repeat line.”  Who elected a senile candidate who the Army wouldn’t even accept as a private because of his mental incapacity? Isn’t it anti-democratic and even somewhat fascist to elect someone mentally incompetent who requires unelected staff to do most of the work for him?

Hunter Biden’s laptop just sits and sits at FBI headquarters gathering dust.  Isn’t that special! Joe Biden is selling our emergency Strategic Petroleum Reserve to foreign countries like China to lower prices for Democrat re-election purposes.  It is at the lowest level in over 40 years.  Isn’t that special! Twitter and Facebook get lawsuit immunity through law from we the people.  Yet, Twitter and FB deliberately suppressed the Bobulinski Biden family corruption story and other conservative stories before the 2020 election. Former Twitter CEO Jack Dorsey called the Bobulinski story suppression a huge mistake.

A poll done by pollingcompany.com after the election found more than enough Dems and Independents would have switched their votes to Trump had they known of the story, winning the election for Trump.

As a result, the 2020 election was a fraud.  And Hillary said Trump was an illegitimate president.  Isn’t that special!  Year-to-year inflation just announced is 8.3% because of reckless Democrat spending.  This worst inflation in 40 years is an assault on the poor and working classes causing millions to make wrenching decisions like not driving to get medical treatments.