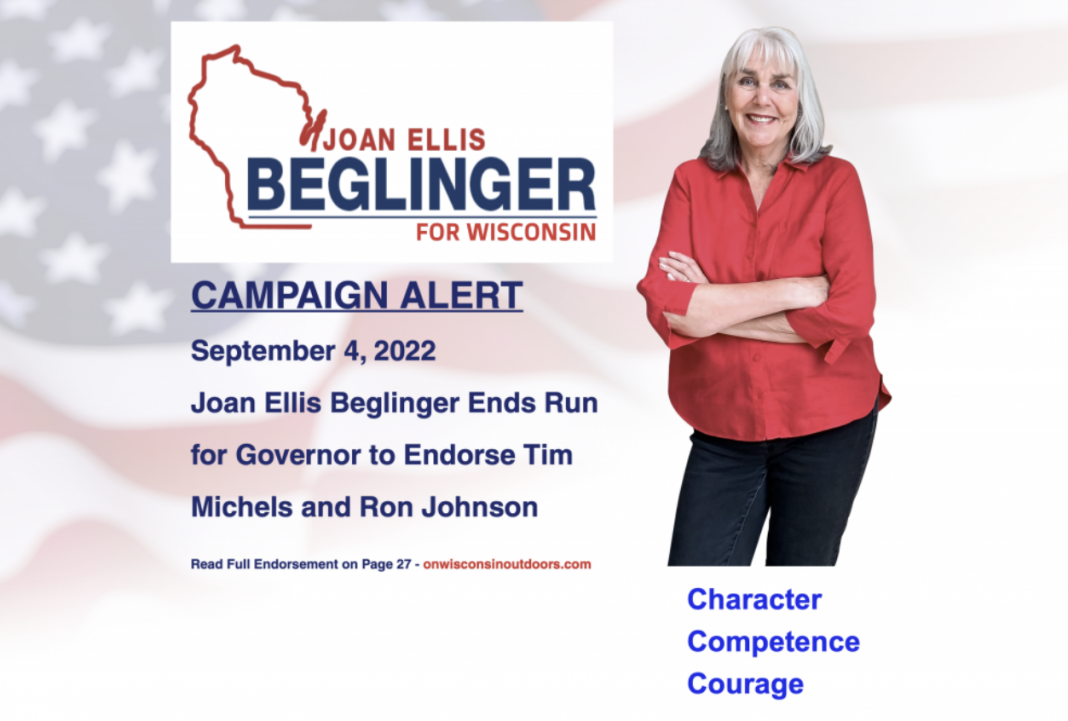 Back in September, I wrote about the Independent Conservative candidate for Governor, Joan Beglinger, suspending her campaign and FULLY AND PUBLICALLY endorsing Tim Michels.

Well, out of desperation, it looks like a shadow groups called ‘Rino Hunters’ out of Washington DC, and another out of Salt Lake City called “Liberty Group, Inc.’ are sending out blatantly FALSE literature and FALSE TV ads lying that she is still running. The groups are is likely spin-offs of the anti-Trump group, called the ‘Lincoln Project,’ or a possible desperate left-wing group seeing Tony Evers tanking and acting on his behalf. They are well funded and THE INFORMATION THEY ARE STATING IN THE LIT ADS ARE BLATANT LIES!

This propelled Joan Beglinger to IMMEDIATELY make a recording reminding people she is NOT running and is voting for and endorsing Tim Michels. HERE IS THE RECORDING:

The shadow group using a NEW website domain that was just purchased a few days ago on 10/24/2022. Clearly, an attempt to derail the surging Tim Michels campaign. Here is the WHOIS data on the domain showing the purchase information:

Here is the domain information from Beglinger’s ACTUAL CAMPAIGN WEBSITE which was purchased back on March 6th:

Internal Evers polling must show him losing, why else would there be an attempt to deceive Wisconsin voters?

In September, Beglinger announced the suspension of her campaign in the following email:

The extent of the corruption in our politics may be the most important lesson from my many months as a candidate for governor. It’s a very serious threat to our freedom. With the election just around the corner, I’m announcing a change in my campaign that will be published in the September/October issue of On Wisconsin Outdoors, online now at onwisconsinoutdoors.com, and distributed throughout the state in the coming week. The OWO article is printed in its entirety below:

Our Path Has Changed. Our Objectives Have Not.

Tony Evers and Mandela Barnes are tools of a Democratic Party that is pushing a radical agenda and eroding our freedom faster than any of us would have believed possible. They must be defeated in the November election.

Tim Michels and I are not politicians and we both have extensive backgrounds in executive leadership in the private sector. Tim entered the race late, secured President Trump’s endorsement and won the Republican Primary. This dramatically changed the election landscape. With just two months to go, I am in my first poll and the media, who’ve ignored me for well over a year, are suddenly interested. They will try to use me to re-elect Tony Evers and I am not going to allow that to happen. This leads me to the only decision that makes sense, given the choices now facing the voters and the enormous threats we face. I am going to do what I can to help Tim Michels and Ron Johnson defeat Tony Evers and Mandela Barnes.

Our elections depend on the voters’ ability to make honest, side-by-side comparisons of their candidate choices. It’s been clear throughout the entire 17 months I’ve been a candidate, that the media, pollsters, and political parties work in concert to control the information voters have. Wisconsin voters must understand this as we continue the battle to reclaim our government.

Our path has changed; our objectives have not. Now more than ever, it’s going to take all of us to expose and eradicate the corruption in our politics and restore our government to one that works for us.

Last week I contacted Tim Michels. We sat down face to face and I told him what I was going to do and why. This is a change in direction but far from the end of the line. My voice will remain clear and strong and I remain totally invested in the work we must do. Please join me in taking back our state.

Share
Facebook
Twitter
Pinterest
WhatsApp
Linkedin
Email
Telegram
Copy URL
Previous article
What Really Went Down at a Recent Tosa School Board Meeting
Next article
The Crossroads Ahead, will we take the road to the Left or will WE make the RIGHT decision?